I'm now back here in Sydney waiting for my connecting flight back to Canberra. Great-googamooga the last few days have been a whirl, and hence a lack of blogging.

(I didn't have my camera with me this day.)

A good day at the booth. I had a couple of Technical Sessions on my schedule, but it was a busy day on the floor.

The Java Posse was walking around interviewing the vendors, I'm sure it is going to be a very interesting podcast. They stopped by our booth, so listen in to that podcast if you want to find out what code-coverage our Clover product achieves.

The first event of the evening was the Adobe party, at the poolroom in Jillian's (in the Metronone). Open bar, good food, lots of nerds, pool tables. What more could you want. Joe Nuxoll taught us how to play "cut throat", which is an awesome 3-player (or 3 teams of 2) game. Kind of a cross between billiards, Risk and Diplomacy.

Next was the Google party, and while at a much swisher location, didn't quite achieve the same vibe. But full of interesting people. I spent a lot of the night chatting with this very nice chap from the Google-mobile team in London.

Day ended around 3pm after a quick trip to Loui's Diner for some pancakes.

(I didn't have my camera this day either... perhaps a good thing.)

This was the last day on the booth. Didn't get to any technical session but spoke to a heap of interesting punters. In previous years, I was a reasonably dedicated schwag hunter, but there are only so many flashing buttons and mouse-pads that you need. I picked up a Duke plush doll, and a couple of Sun mugs with funny phrases on them (the details of which allude me right now, blame it on the timezone shift). One of the coolest schwag items (beside our own t-shirts, of course, of which we ran out earlier that day) was a cool blue/pink ball (from Terracotta I think). It was blue, and if you threw it up it would kind of turn inside out and when you caught it it would have turned pink. I suppose you had to be there.

Later that afternoon we decided to organize what will hopefully become the Inaugural Cenqua Just-In-Time JavaOne party. To protect the innocent, and perhaps not so innocent, I won't go into too much details about who we managed to drag along. Let's just say it involved a little obfuscation. There were some abstractions in the design that definitely did not leak, no matter how hard we looked.

The day ended again around 3pm, with another trip to Loui's. Well, for some of us it ended at 3pm: some were still arriving back at the hotel when I was getting up for the General Session on day 4.

The last day. Fighting a hangover that was much smaller than it deserved to be, I headed out for the "Toy Show" General Session. This was pretty fun, and like each year James makes a great host. (I should really try getting to the other General Sessions and Keynotes next year.) 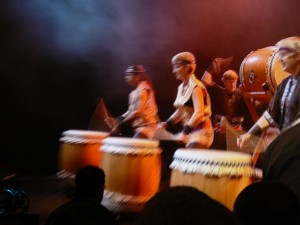 The show started with a set of "tycho" (spelling?) drummers, which was really fun. 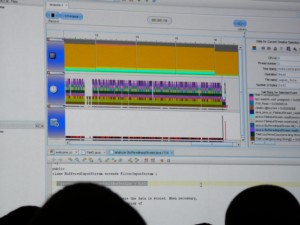 Roman Sholopsk showed the "DTrace Light" / "DLight" visualizer. This would actually be really really useful if dtrace ran on something other than Solaris. 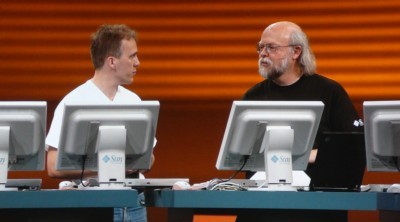 Tor Norbye a gave "mashup" presentation showing off the new Netbeans. I can't say that the refactorings and tools on show in Netbeans were anything I hadn't seen before in IntelliJ IDEA, aside perhaps from the great JRuby support. Tor's style and presentation was top notch: even though he talked fast, clicked around the screen fast, and presented a lot of dense information, I was always able to grok what he was saying and as I then started to wonder about how you would do X, he started showing how to do X. A very cohesive and coherent and grokkable presentation.

There was a demo of the Blu-Ray technology: the whole menu-system jobbie in Blu-Ray is a Java derivative. Very impressive actually.

A couple of guys from Cinegistics showed an app for use when setting up video shots. Plug your HD camera into a laptop, and this (almost 100%) Java Swing app shows the scene, can highlight light/audio problems etc. The most impressive thing was that all the number crunching was done in Java. I have seen a few things at JavaOne that I wouldn't have given credit as implementable in Java. 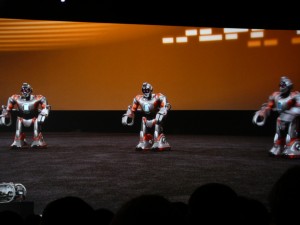 Those Java-enabled robots made an appearance. They are very cute, I went and checked out their booth the previous day. This following robotic arm was able of achieving rapid movements in access of 10g. All in RealTime Java. Impressive. 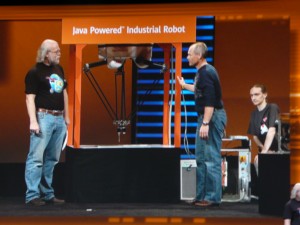 They "flew" in (suspended from wires) Paul Perrone's remote helicopter, which has a 3D laser imaging system on the bottom. It was able to take these great 1000-scan-per-second 3D linear maps of the stage, with James and Paul lying on the floor. All the imaging and stability processing was done in RT Java. I think that's great. 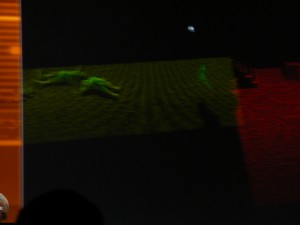 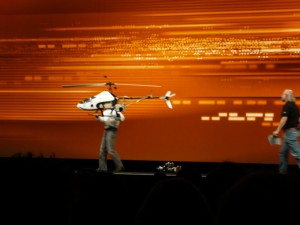 After a trip to the Pork Shop for breakfast, and Ritual Roasters for coffee, I headed back to JavaOne for Martin Odersky's Scala talk. 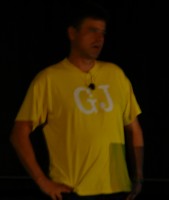 And that, as they say, is the end. Another great JavaOne.