I'm sure we are all aware of the Apache webserver's dominance. But Apache is just not httpd, it is a vibrant community of software projects. Well, I think we can just let this graph speak for itself: 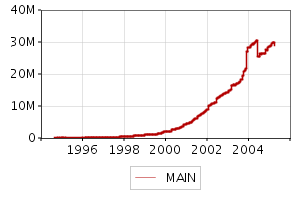 This is the line-count graph of Apache's CVS repository, generated using FishEye1,2. Random info about this data:

1 We've been putting FishEye through its paces on a copy of the Apache CVS repository.

2 We have a plan to team up with Contegix to offer free FishEye hosting for Open Source projects unable to run FishEye themselves. Send us an mail if you might be interested.